The Greater Caucasus Mountains stretch from Sochi in Russia to Baku in Azerbaijan, passing through northern Georgia along their length. The wildest country within the Caucasus chain can be found in Azerbaijan - the history of the country meant that focus was directed towards the oil business and so…

The Greater Caucasus Mountains stretch from Sochi in Russia to Baku in Azerbaijan, passing through northern Georgia along their length. The wildest country within the Caucasus chain can be found in Azerbaijan - the history of the country meant that focus was directed towards the oil business and so outdoor sports and tourism have remained relatively underdeveloped.

This adventurous ride has been devised by our guide in neighbouring Georgia, Audrey, who has a vast knowledge of the Caucasus mountains and their people. You will be accompanied throughout by local Lezgian people who know the incredible national park by heart and will escort you to the village of Lahic which has been settled by Tat people who originally came from neighbouring southern Iran.

Mountain horses are the only form of transportation in this area - not just for people but also for carrying materials such as wood and stone. You will pass through untouched forests and across wild rivers, over high passes and riding along crests and plateaus. Each day your route is chosen in accordance with the local weather conditions, available paths and snow coverage. This is a true, unmapped adventure and each day will be different from the last.

This is not a fast ride as all your progress will be somewhat encumbered by the need to transport all your belongings with you. There are also long stretches of walking on foot and leading your horse, so this is a true expedition where the focus is on exploring a region that few people will have a chance to discover. You must have prior experience of hiking and camping in the mountains to join this trip. You must also have an open mind to discover this area which is untouched by tourism and still raw. Be prepared to go without your mobile phone, camp in extraordinarily remote locations and take a step back in time. As the ride is still in its exploratory stages, there is still a chance that things may not go to plan, so you should be happy to take each day as it comes. 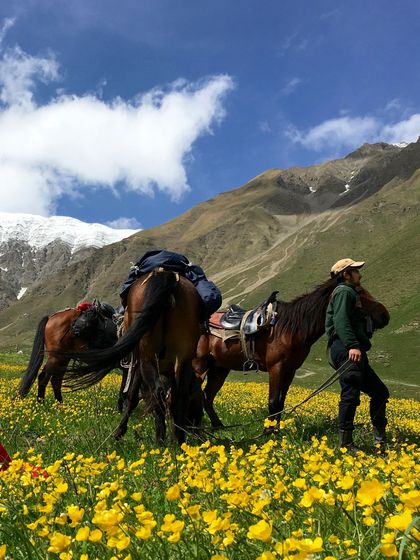 You ride in local mountain tack which is very simple. Your guide brings cushions from Georgia to make your saddles more comfortable. Your belongings are packed in bags and tied to the pack horses. Bridles are simple snaffles, many made of rawhide. You will be shown how to tack the horses on the first riding day, but after that, it will be your own responsibility to tack and untack your horse each day – your guides will tack their own horse and load the pack horses, but are on hand to help you.

Caucasian mountain horses. The horses are all born and raised in the Caucasian mountains. They are even-tempered, calm and tough with great balance. Skilful and smart, they know how to conserve their own energy and how to traverse the steep mountains safely.

Due to the rustic nature of this trail, it is not suitable for children to take part.

You must be fit and healthy, prepared for long hours both in and out of the saddle, as you will have to dismount and walk for long periods too. You will be in a very remote area and will have days with no phone signal, so riders with health conditions should consult their doctor before considering taking part in this trip. You must have prior mountain experience. 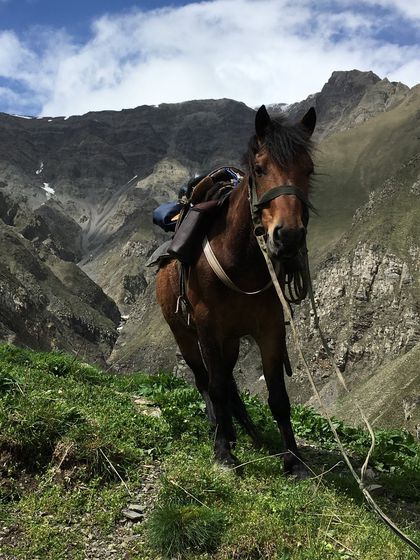 On the trail all your belongings and provisions are carried on pack horses and so you will eat what's easy to find and carry. There are plenty of vegetables, fruit and cheese, so vegetarians can be accommodated but any other special diets would have to bring their own substitutes.

When in Tbilisi and Baku you will dine in local restaurants and get the chance to try out local dishes. Dinners on the first and last night are to your own account so you can choose what you wish.

For the majority of the trail you will be camping in two-man tents and will need to bring your own sleeping bags and mattresses. This is remote, wild camping with no facilities although there's often a nearby river for washing.

There is one night in a family home in Lahic where you have beds but facilities are shared.

Four nights are spent in four star hotels in Baku and Tbilisi.

There is also one night on a night train from Baku to Tbilisi. 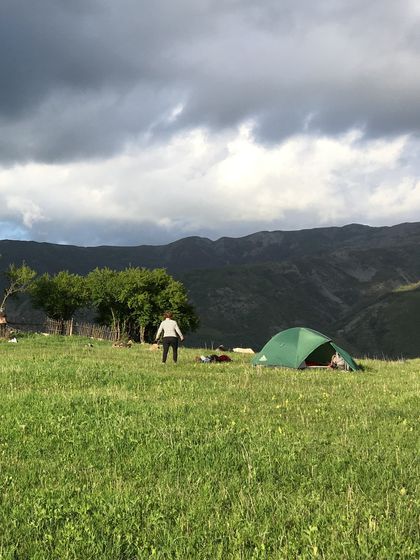 This is a riding trip and not suitable for non-riders - even your belongings are carried on horseback.

There are some sightseeing days included at both the start (Baku) and end (Tbilisi). 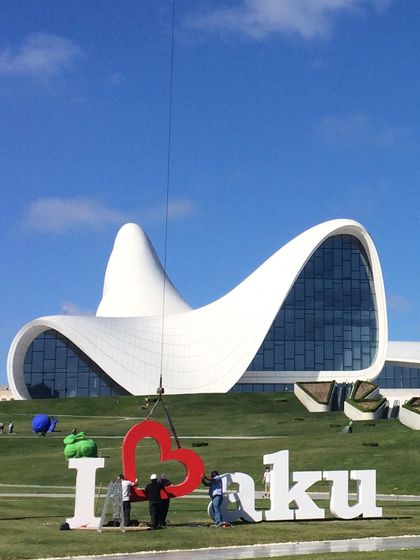 For the standard itinerary, you will arrive at Baku airport in Azerbaijan but depart from Tbilisi airport in Georgia. 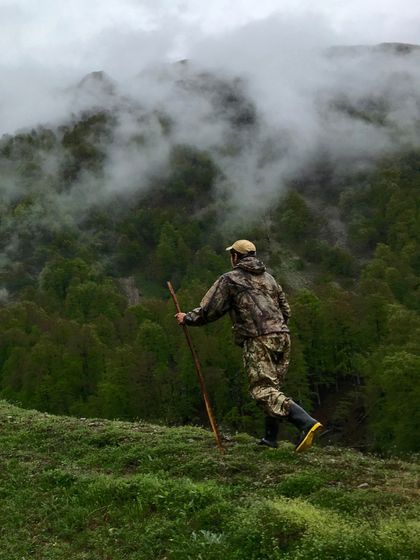 Favourite Memory - Arriving at our final camp on the hill opposite the village as the cows were leaving to go home. We found a level site despite having to move several stones & cow pats! The boys rode over to the village & came back in the dark with beer and crisps. We celebrated everyone making it safely over the mountains. Audrey made an amazing spaghetti dish smothered in the remaining cheese, which we ate piping hot in the freezing cold under the stars and moon before snuggling into our sleeping bags

This unique horseback trail through Azerbaijan offers a mix of nature and culture as you ride through the green mountains before discovering the volcanic deserts, and see the contrast between the ancient heritage with the modern buildings and former oil lands.

Please note that the riding itinerary is flexible and will depend on local conditions and weather. High passes are spectacular in good weather but in poor weather you will have to take lower, safer routes. You need to be prepared to 'go with the flow' on this exciting new ride.

Today is an arrival day only, with airport transfers possible from early afternoon until midnight. If you arrive early then you can explore the city of Baku a little. Accommodation is provided in a hotel in the centre of Baku, but meals are to your own account.

Meet at 8am and set off to discover the medieval heart of Baku with your guide. Walk through the double arches of the Fortress Wall which was constructed by King Manoucher II in the 12th century. The wall encircles the most ancient part of the city, called Ichari Shahar (Inner City) and preserves a medieval Orietnal citadel which has been reconstructed. You can also visit the Royal Palace of Shirvan-Shahs-Kings from the 15th century; the Gasim public bath house from the 17th century and the ismayiliye Palace which was built in venetian gothic style by the oil baron Agha Musa Naghiyev in the late 19th century. Have dinner together in a restaurant before a second night in your hotel.

Today's route will depend on local conditions. You either transfer to the Lesguins village of Istisu where you board an old soviet truck to transfer out to the first camp, or you transfer to the Tat village of Lahic and overnight with local people in a guesthouse. Either way, you will be preparing for the start of your riding adventure tomorrow.

Set out early for a long and beautiful day on horseback. Ride up through the valley to a crest where you'll spend a few hours admiring the open panorama towards Babadag - the highest mountain in Azerbaijan. After this pass you ride downhill to Camp 1 which is located deep in the valley - an amazing setting. Dinner and overnight in camp.

Set off riding through forest and into a large and long valley, following the river as it passes through the forests. Camp 2 is isolated in the midst of a nature reserve and national park hidden in the mountains. Dinner and overnight in camp.

For the next three days you will ride from this camp towards the Qetish village of Xinalig, but your route won't be decided until you are there, depending on weather conditions. You will ride over passes of more than 3,000m and may pass beautiful lakes on high plateaus (on some routes). Each night you will set up your tents but there is no large mess tent until you reach Xinalig on the third night.

Ride in the direction of Shakhdag, an impressive summit which offers an outstanding view of the surrounding area. You will reach the southern slopes of the Caucasus mountains - Azerbaijan is the only country in the Caucasus chain where you can cross from the northern to southern slopes without leaving the country. Final camping nights.

You are transferred back to Baku by vehicle, arriving by mid afternoon. Take a stroll through the city or visit the Alyiev foundation before dinner in a restaurant. Overnight in a hotel.

Transfer out to Qobustan which is rich in archaeological monuments, with more than 6,000 rock engravings. The site was also a cave city built in the middle of ravines in the desert. Most of the rock engravings depict primitive men, animals, warriors with lances, caravans of camels and the sun/stars. Have a picnic lunch and transfer back to Baku to visit the Absheron Peninsula. Drive to the old petroleum industry plants which contrast against the pure mountains and visit the Ateshgah temple of fire in Surakhany village. Zoroastrians travel thousands of kilometres to worship where fire comes out of the earth - the Yanardag mountains has natural gas which has been burning for several thousands of years. Lunch to own account.

An early dinner tonight as you will be boarding the soviet night train to Tbilisi which departs Baku at 9pm.

NB> It is possible to depart this day from Baku if you prefer - taking your own taxi to the airport.

You'll arrive into Tbilisi around 10:45am and can drop your belongings at the hotel before setting off to explore the city. Visit the old centre with it's history and architecture which is very different to Baku - your guide will help you to appreciate the similarities and differences. Lunch to own account, but final dinner together in a restaurant before overnighting in your hotel is included.

You will be transferred to the airport for your flight home.