Located high in the mountains of the Veraguas Province in Panama, the small town of Santa Fe invites you to discover this new and breathtaking destination. The Santa Maria river valley heads towards the foothills of Cerro Tute and the mountain range that forms the crest of the continental divid… 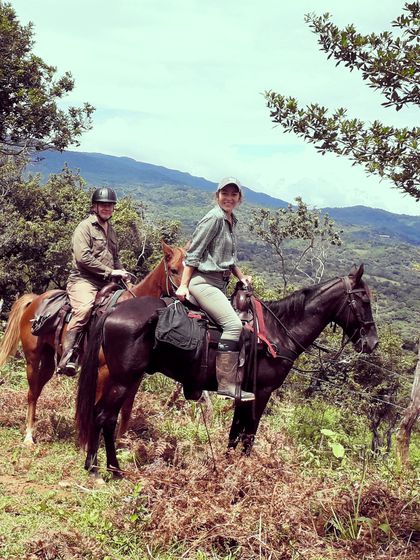 Located high in the mountains of the Veraguas Province in Panama, the small town of Santa Fe invites you to discover this new and breathtaking destination.

The Santa Maria river valley heads towards the foothills of Cerro Tute and the mountain range that forms the crest of the continental divide. This geographical feature also indicates the start of the 72,636 hectares of Santa Fe National Park; home to an abundance of wildlife including the second largest big cat population in Panama. The national park is an expanse of jungle that ends on the sandy beaches of the Caribbean Sea. As the landscape increases in altitude you are rewarded with the most spectacular views of the central highlands of Panama.

Take trails deep into the national park, along narrow indigenous footpaths, under immense jungle foliage with toucans and bright blue morpho butterflies. Bathe at the base of hidden waterfalls with deep blue pools seldom visited by outsiders.

​Pick up the pace and ride down in the foothills where the land is flatter and more open allowing you to fly past remote farms and cattle posts. Catch a glimpse into life of rural Panama where self-sustainable living is a necessity, not a trend and your success that year is based on the rainfall and your own hard work in the fields.

At certain times of year it is also possible to engage in a local cattle wrangling experience, either moving the cattle between pastures or bringing them down from the mountains for a routine check up and vaccination. Discover first hand how the local way of life often revolves around livestock and connection to the land.

Our partners in Panama have brought skills from southern Africa to southern America. Martin was born and raised around safari lodges in South Africa whilst Elizabeth has 25+ years equestrian management and competition experience in her home country of Botswana. They moved to Santa Fe in 2016 and were enchanted by the beautiful mountains, where Elizabeth set about exploring new routes on horseback whilst Martin was able to pursue his passion of fishing in the Pacific and Caribbean waters. They are both keen to share their home with you whilst also respecting and helping to preserve the local culture and environment. 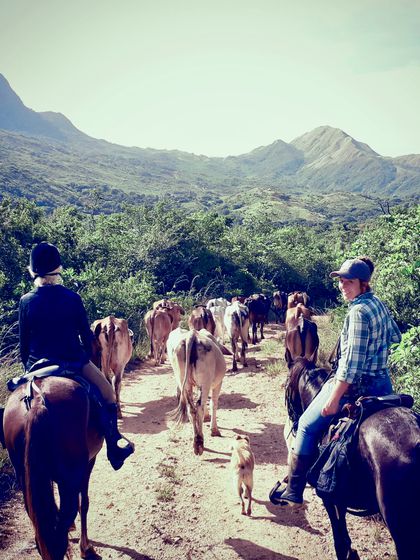 Western style saddles with a prominent pommel, deep seat and high cantle.
The horses respond to neck reining so you carry the reins in one hand and only need a light pressure of the rein against the neck to change direction

The horses are mixed breed Paso Creol, which are known for their smooth gait and even temperament.
Each horse has a unique personality and its own bridle. Only those that require shoes are shod whilst those with strong feet are barefoot. The horses are stabled at night to protect them from rain but pastured during the day. In addition to grazing they are fed concentrates and hay.

Children 6 years or older can be accommodated with their family 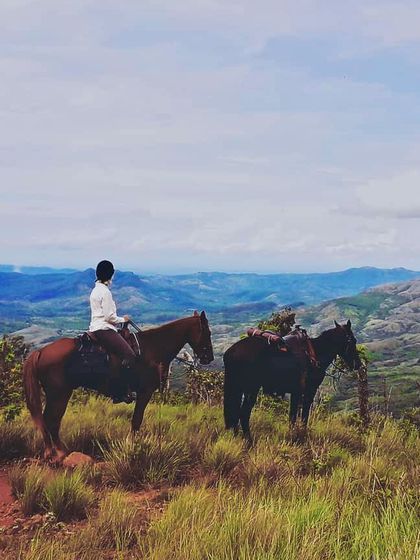 A continental breakfast is included at the hotel.

Lunch is included and may be a BBQ or taken at a cafe out on the trail.

Dinner is to your own account. You can choose to dine at the hotel or there are some locally owned restaurants nearby.

You are accommodated in the Hotel Anachoreo (or similar) which is just minutes from the town centre and has stunning views. The hotel has its own gardens with tropical plants and a relaxing patio. There is also Wi-Fi in the communal areas and a small restaurant/bar.

The rooms have high ceilings and windows which overlook the gardens and mountains beyond. They are simple but comfortable, with en-suite bathrooms. All rooms also have sitting terraces with hammocks. 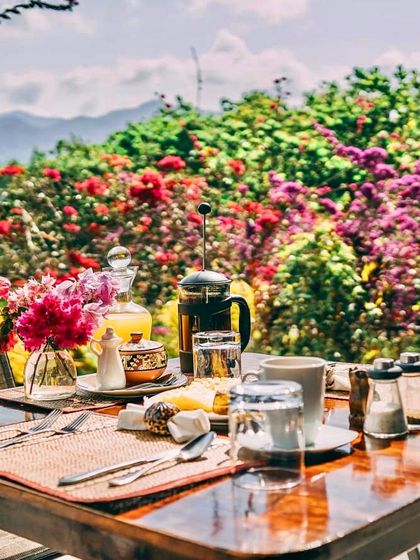 Santa Fe is all about exploring the outdoors. There are hiking trails you can follow on your own or plenty of local activities which our partners can help to organise for you. 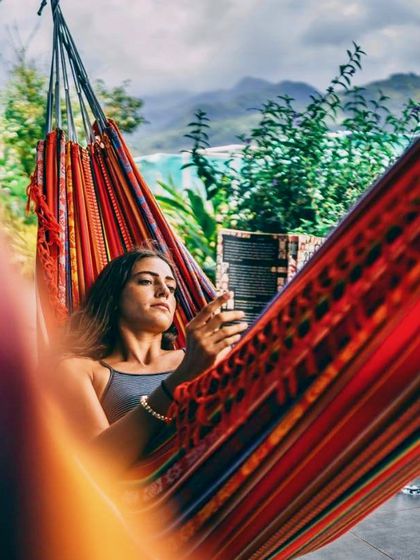 The nearest airport is Panama City and this is c. 4 - 5 hours drive from Santa Fe.

Renting a car is straightforward (they drive on the right hand side). If you prefer not to drive yourself then a private road transfer can be arranged for extra cost.

Alternatively, a charter flight is available which takes 30-45 mins and seats 8 passengers. Please contact us for quotes. 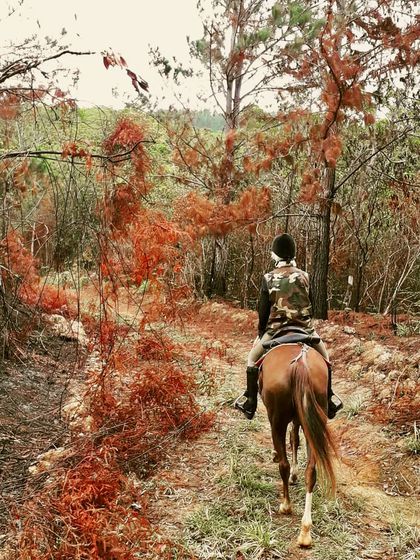 Escape to the mountain hamlet of Santa Fe where life moves at a more relaxed pace. Horseback rides across varied terrain radiate into backcountry Panama from your centrally located B&B and immerse you into the local landscape and culture.

Check-in to your accommodation at Hotel Anachoreo or similar and receive a warm welcome in Santa Fe.

You are collected from your accommodation after breakfast and transferred 30 mins to the trail head where you'll meet your horses. Today's ride explores the drier foothills of the Cerro Tute mountain range. Covered in low shrub, the majority of your ride takes you through open spaces with expansive views and includes several wide river crossings. This is the perfect opportunity to test the speed and agility of your mount as the land is flatter and drier. After a full morning of riding, head back to Santa Fe town for lunch. Afternoon is free to explore at your leisure.

An early start to make the most of the cooler air before the sun starts to heat things up! Transfer out of Santa Fe town to an old cattle corral to meet your horses. From here you ride into Panama's remote interior, exploring on horseback the valleys and hillsides where in pre-Columbian times Chief Urraca and his Ngabe people once roamed. Ride into Santa Fe town in the late afternoon for a delicious BBQ and sundowner drinks.

Todays ride takes you on a loop from Santa Fe town and along the boundaries of the Santa Fe national park. With over 72,000 hectares of tropical jungle you ride on the fringes, along narrow trails and crossing multiple waterways. You'll be impressed by the sure-footedness and level minds of your horses as you cross suspension bridges and pick your way through rocky river beds. Ride back into town for a late lunch.

The afternoon can be spent relaxing in the hammocks with a book or down at the rivers edge soaking up the sun on the warm boulders.

Ride to the trailhead of the Bermejo waterfall where you hitch the horses and head into the jungle on foot to one of the most beautiful waterfalls in the area. There is a deep clear pool to swim in, a hidden cave with pre-Columbian carved petroglyph rocks to explore and amazing jungles to get immersed in. Return to a late lunch and a relaxing afternoon.

An early morning ride which starts with a visit to a locally owned organic coffee farm. Hitch the horses whilst you explore the self sustainable gardens and traditional coffee making process. With enthusiastic local hosts you'll gain an insight into gardening and farming in tropical Panama. From here you continue on horseback to explore the rural farming areas and pass traditional homes before heading back to town for lunch.

Departure after breakfast, or perhaps extend your stay to take in the Caribbean coast.