The Amazon is a huge place, full of rich experiences and the locals say that it would take many lifetimes to experience it all. Marajó is an island located at the mouth of the Amazon River in Brazil. It is the largest fluvial island in the world, with a land area of 40,100 square kilometres (15,… 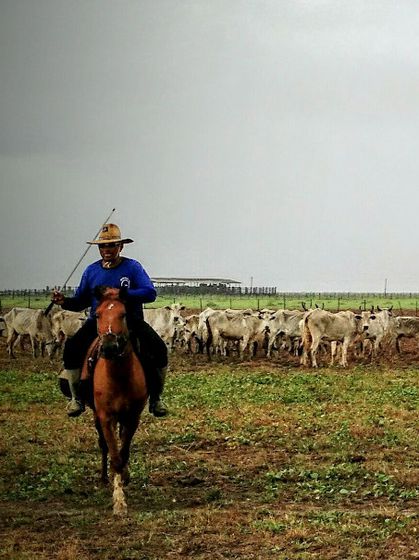 The Amazon is a huge place, full of rich experiences and the locals say that it would take many lifetimes to experience it all.

Marajó is an island located at the mouth of the Amazon River in Brazil. It is the largest fluvial island in the world, with a land area of 40,100 square kilometres (15,500 sq miles) and is roughly the size of the Netherlands and Switzerland. It is approximately 295 kilometres (183 mi) long and 200 kilometres (120 mi) wide.

Together with several smaller neighbouring islands, separated from Marajó by rivers, it forms the Marajó Archipelago, with an aggregate area of 49,602 square kilometres (19,151 sq mi). Large parts of the islands are flooded during the rainy season because of the higher water levels of the Amazon River along the coast and heavy rainfall in the interior. Marajó is almost entirely flat and during the rainy season, much of the island turns into a large lake.

The east side of the island is dominated by savanna vegetation. There are large fazendas (ranches) with huge herds of domesticated water buffalo on the island - c. 700,000 of them (breeds include Carabao, Jafarabadi, Murrah and Mediterranean).

Marajo island was also the site of an advanced pre-Columbian society - the Marajoara culture - which existed from approximately 400 B.C. to 1600 A.D. Washed by fresh and saltwater at one of the world's most majestic deltas, Marajó Island is an alluring destination for riding in the Amazon environment.

No more than a dozen towns are scattered on Marajó, and most of Marajó's 250,000 inhabitants live on the main island's eastern shores, where the towns of Soure and Salvaterra are located. Just like the ancient marajoara mound builders, whose culture thrived between the 5th and 14th centuries and whose survival was closely tied to the Amazon river, today's marajoara life greatly revolves around water.

To give a succinct overview of the complete fauna and flora of the Amazon is difficult. The rivers and streams of the basin teem with life, and the forest canopy resonates with the cries of birds and monkeys. There is a notable paucity of large terrestrial mammal species; indeed, many of the mammals are arboreal. Avifauna is particularly rich with about 540 species. Marajó is a birdwatcher's dream. The scarlet ibis (Eudocimus ruber), or guará is one of many species of birds which can be seen on the island - roseate spoonbills, parrots and little blue herons are some of the other birds easy to spot during the dry season (roughly May-November). 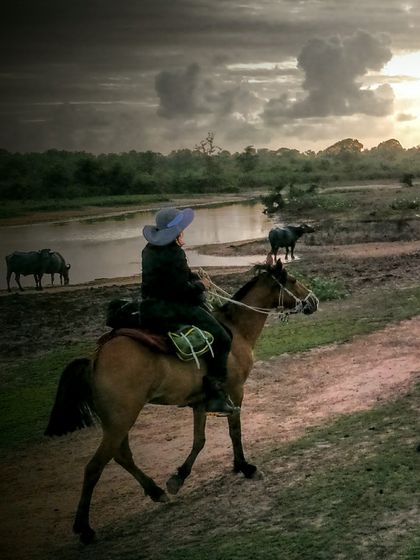 Traditional and simple local bridles and saddles. Bridles are often made from synthetic materials so that they are hard wearing and horses tend to be ridden in western-style shank bits. The saddles of the area are a mixture of gaucho and trail saddle, with a broad seat designed to be comfortable for long hours tending to cattle.

Local Marajoara horses; - The Marajoara horse breed was derived from Portuguese stock from Cabo Verde and introduced into the Marajó archipelago in 1702. Since then, these animals have become adapted to the adverse climatic conditions of the region, facing two very distinct seasons: the rainy and the dry. Insects and the mud during the rainy season are compensated for by access to a great variety of pastures for grazing. However, since these pastures tend to disappear during the dry season, they don't offer a great food balance year-round, so the Marajoara had to develop survival alternatives and survive relatively little food. They have adapted well to the flat, low-lying terrain of the Marajó Archipelago, acquiring a number of adaptations, such as broad, rounded hooves and stronger muscles in their thighs, rump and back due to trotting in flooded marshland, which is typical of the region during the wet season. The horses tend to stand at only 13-15hh and so are small but very strong. 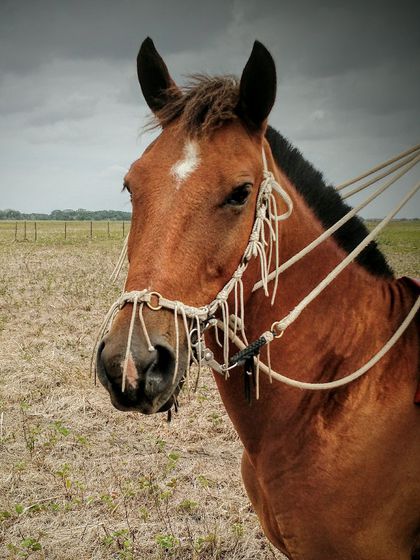 The Amazon rivers and forest provide endless exotic ingredients! The fruits are too numerous and plentiful to list and you will probably have never seen or tasted any of them before!

There is plenty of fish served on this itinerary - both the huge Pirarucu, known as the Amazonian Bacalhau (cod) and the Filhote. Both may be included in stews with coconut milk, potatoes and beans. Crab is also very popular.

Brazil nuts are plentiful in this region and can be found plain, salted or caramelised.

Acai is the fruit of the typical palmtree of the Amazonian lowlands. This dark purple and pungent fruit is consumed in many ways - as a drink with tapioca, as a pap with manioc flour or just as a juice with sugar.

Buffalo meat and cheese are also popular ingredients in the rich marajoara culinary. Frito do vaqueiro, or the "cowboy's fry", is a local dish which consists of buffalo meat cooked in its own fat and served with a kind of pirão made from buffalo milk and white cassava flour. Filé marajoara, the local buffalo steak, is smothered with melted buffalo cheese. Shrimp fritatta, chicken with fried bananas and Brazil nut farofa are some other delicacies you'll find on the ranches where you stay.

You stay in a 3 star hotel in Belem, but for the rest of the trail, you stay in traditional fazenda's (ranches). Some have double, triple or quadruple rooms. It is not possible to guarantee single accommodation every night.

On Day four, the farm has only two rooms, each with three beds - if there are more than six riders in the group, then additional riders sleep in hammocks. 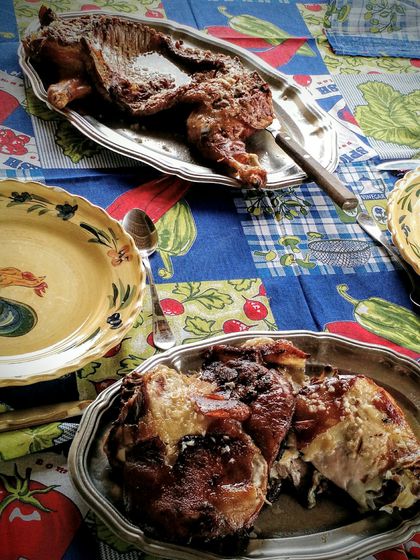 The emphasis on this holiday is observing the unique flora, fauna and birdlife of this Amazonian delta. Horses are used to cover the ground, but there are also boat trips and guided tours and museum visits. Non-riders cannot be catered for, but anyone willing to give riding a go can be accommodated. The riding pace is not fast and beginners are welcomed. 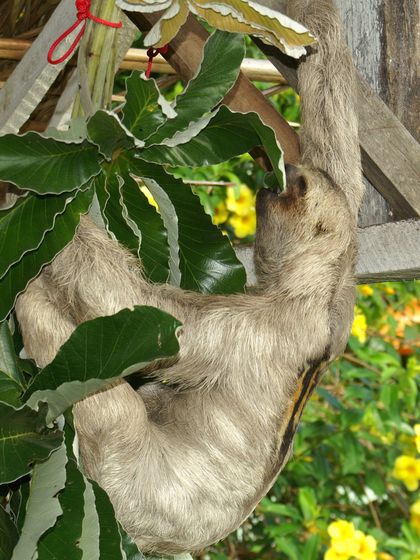 Airport transfers are included from and to Belem. There is no riding on your arrival/departure days to allow some flexibility with flights.

Ride through the delta wetlands of the Amazon river through the Marajo archipelago and experience the rustic lifestyle of water buffalo farmers whilst marvelling at the diverse wildlife and birdlife. This new itinerary explores this freshwater and salt water paradise and is suitable for all abilities of rider.

You will be transferred from Belem airport to your 3* hotel in Belem. Depending on your time of arrival you may be able to explore the town a little. You will be taken to Mangal das Garcas for a visit and dinner in the evening.

Early in the morning you will transfer to the docks for your boat to Marajo Island. Little known Marajo Island is one of the best preserved ecological sanctuaries in the Amazon. It's natural beauties are divided between the plain covered with dense forests and savannah; there are river beaches, various lakes, dunes, forests and a rich flora and fauna. During the next few days you will explore this unique environment.

Upon arrival in the little city of Soure you will visit a typical marajoara ceramic atelier and later a saddle maker who makes the unique Marajoara saddle. A light lunch is served in a restaurant near the dock before you take another, faster boat (c. 1.5hrs), to the first fazenda (ranch). On arrival you will have your first meeting with the Marajoara horses and a short familiarisation ride before overnighting in this fazenda.

After breakfast you ride to a lake where you can watch the farm fishermen catching the giant pirarucu or arapaima fish - these fish are some of the worlds largest freshwater fish and can grow as large as 3 metres (9.8ft) and weigh over 100kg (220lb). The ones you will see will likely weigh c. 20kg and later you will get to eat them too. You ride through beautiful Inga forests and palm tree fields where you may see buffaloes and horses grazing as well as hear other animals passing through the forest. In the afternoon you may see local vaqueros (cowboys) working their cattle and horses too. After a quick stop to view the ruins of the famous Tapera one (once the largest on Marajo, with 45,000 hectares) you reach the traditional farm of Ilha das Rocas where you overnight.

Today's ride takes you to Fazenda Desterro, past more buffalo and horses as well as marrecas and other seasonal birdlife. Stop at Fazenda Flecheiras to watch them making buffalo cheese - this fazenda is also close to an important Indian burial ground. Continue riding past one of the islands largest leafy trees which is home to many heron and maguaris nests. On arrival at Fazenda Desterro you can try out the typical mount of the Marajo Island people - the buffalo!

After lunch, ride to the banks of the river, where a fast boat will be waiting to transfer you to Fazenda Sanjp where you overnight.

After breakfast you ride on the land surrounding the fazenda. This is an amazing area with scarlet ibis, snowy herons and roseate spoonbills all seen together - a paradise for bird lovers and a colourful spectacle for all. After lunch, continue riding through these glorious forest, full of surprises. Spend a second night at Fazenda Sanjp.

After breakfast, depart Sanjp and ride across Fazenda Bom Jardim and its forest. There are many animals in their fields and after lunch you can help the vaqueros bring c. 250 farm horses into the corral and watch them work with them. Tonight you sleep at Camburupy, another traditional Marajoara farm.

After breakfast, start riding to Soure. You ride mainly on the beach, crossing some creeks and watching scarlet ibis - some of the most spectacular birds to view. There are also lots of spotted sandpipers, a bird which migrates north during the warm seasons. You will be amazed at how high some of the tree roots reach and you may be able to ride underneath them!

On arrival at Soure there is time for a light lunch before taking the catamaran boat back to Belem. Overnight in a 3* hotel.

Breakfast and departure in the morning from Belem airport.