The Kingdom of Eswatini (formerly known as Swaziland) is a new and exciting destination for horse riders - with its diverse terrain, accommodation and Swazi culture, you'll be immersed in the real Africa. Mlilwane Wildlife Sanctuary is spread across a transition zone between middle-veld (grassl… 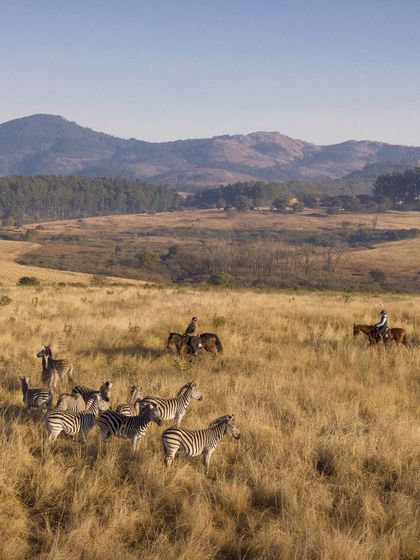 The Kingdom of Eswatini (formerly known as Swaziland) is a new and exciting destination for horse riders - with its diverse terrain, accommodation and Swazi culture, you'll be immersed in the real Africa.

Mlilwane Wildlife Sanctuary is spread across a transition zone between middle-veld (grassland savannah) and high-veld (mountains) providing an ever-changing landscape. Along the water courses you may see hippo, crocodile, fish eagle and many more water birds. Across the plains you'll get close to wildebeest, zebra, nyala, roan antelope, blesbuck and impala as well as the ever-entertaining warthogs. Originally a commercial farm and tin mine, Mlilwane was the first conservation area in Eswatini and has many intriguing historical points of interest, from the tin mines themselves to Bushman Caves. On horseback you will be able to appreciate how nature has reclaimed the land once utilised by humans.

After exploring Mlilwane you head to Hlane Royal National Park to focus on the larger species from a vehicle or on foot. Hlane has the highest density of tree-nesting vultures recorded, hence these fascinating birds have a strong presence. There are also elephant, white rhino, lion and giraffe to search for.

You then continue to Mkhaya Game Reserve - Eswatini's Refuge for Endangered Species where you may be lucky enough to spot white and black rhino, giraffe, tsessebe, sable antelope and buffalo.

Moving between these parks you will get a fantastic overview of the country. High up in the mountains of Mlilwane North you will get never-ending views across Eswatini, South Africa and Mozambique, putting the whole of life into perspective.

You are hosted by a family-run team of horse lovers and conservationists. Please note that this is a remote trail with many nights without electricity or cell phone signal. 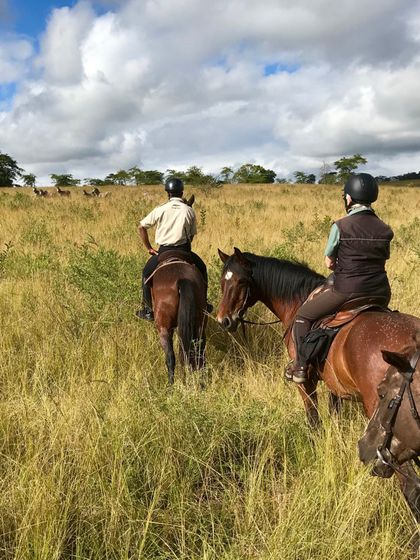 Liversage enduro saddles (trail saddles) with simple snaffle bridles and rope halters. There are small saddle bags in the numnahs to carry water and your lunch.

Your horses have been carefully selected and bred for comfort as well as easy and happy riding. There is a herd of 50 horses comprised mainly of crossbreeds from a foundation stock of Arab, Warmblood, Boerperd and Thoroughbred with some recent additions of Percheron, Friesian, Clydesdale and Shire crosses.

The rides take you across technical terrain where you will cross rivers on horseback and may have to dismount and lead your horse over tricky paths. You will be expected to tack up your own horse and mount independently from the ground (with the help of a mountain rock if required).

Riders must be 16 years or older.

You need to be fit for long hours in the saddle and able to dismount and lead your horse on foot. Some of the camps are remote so you need to have good general health. 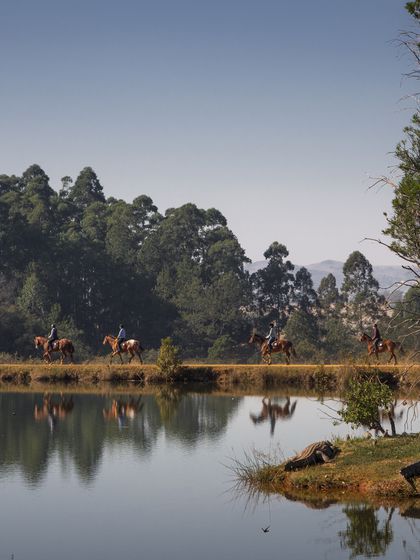 Meals on the trail are all prepared over an open fire and supplies are brought in on the support truck. Vegetarians can be accommodated and some special diets but please check with us first as sourcing some food stuffs can be difficult. Vegans cannot be catered for.

You stay in a diverse mixture of accommodation throughout the trail.

On Mlilwane Wildlife Sanctuary you stay in beehive shaped huts, which are traditional grass dome huts built on a frame of bent saplings with en-suite toilet and shower.

At Hlane Royal National Park you stay in rondavels which are basic, clean and comfortable. The rondavels are semi-open with no doors or windows. There is no electricity and camp is lit with paraffin lamps. All beds have mosquito nets.

At Mkhaya Game Reserve you stay in their unique Stone Camp. These three nights of camping are in bell tents with stretcher beds, long drop toilets and bucket showers. Again there is no electricity here and each tent has a solar lamp, but you'll need your own head torch.

There is also a luxury night at the Forester's Arms Country hotel. 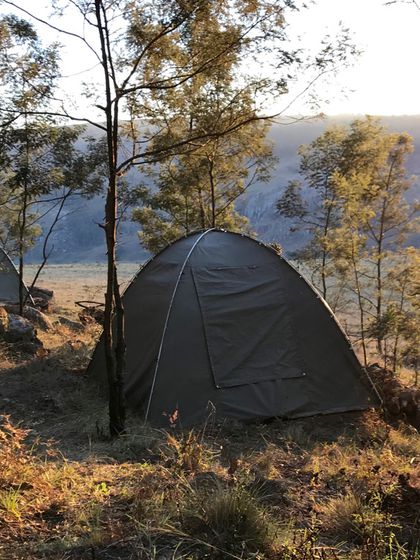 On the first 6 days of the trail the days are filled with horse riding and there is little time for anything else. There are some nice hiking trails if you wish to use different muscles occasionally.

On the last couple of days you experience both game walks and game drives to allow you the chance to view the Big Five. 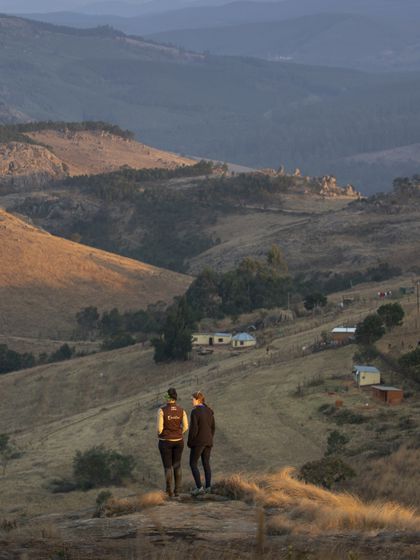 Eswatini is less than 400km from Johannesburg airport, so we recommend a road shuttle which is more affordable and takes the same amount of time.

The daily shuttle departs Johannesburg's OR Tambo airport at c. 09:00am on your arrival day, and departs Ezulwini at c. 10:00am on your departure day. Your guides will transfer you the final 10km between Ezulwini and the reserve.

You MUST book flights which arrive c. 7am to allow time for passport control and to collect your luggage before making your way to the shuttle. The journey to Eswatini takes c. 4 hours from the airport to the border, plus 30-60 mins for passport formalities and another c. 30mins to your destination. 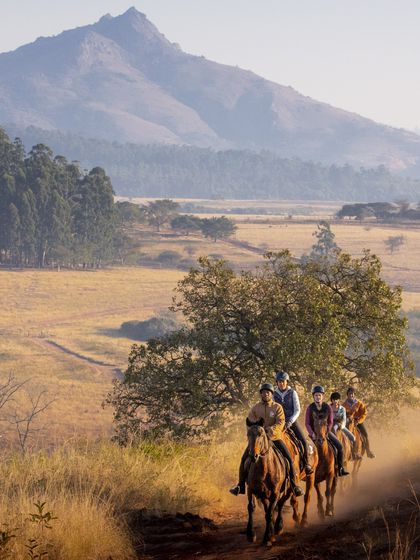 This ten day trail includes six days of riding along with game walks and game drives so that you can truly explore the Kingdom of Eswatini.  No two days are the same as you cross from game-studded plains to mountains, through commercial forests and rural communities to discover spectacular highlands.

Arrival day. If you are arriving on the shuttle from Johannesburg then you will be collected and transferred to Mlilwane Wildlife Sanctuary to overnight in their rest camp. There will be time to meet the horses but there is no riding today, however there are a number of hiking trails if you wish to stretch your legs.

After breakfast you'll set off on your first ride on the reserve with hopefully plenty of game viewing whilst you get to know your mount. Along the water course there are hippo, crocodile, fish eagles and many water birds. On the plains you could spot wildebeest, zebra, nyala, roan antelope, blesbuck and impala. Return for lunch at the Hippo Haunt restaurant and then set out on an afternoon ride. Return to the rest camp for dinner and to overnight. The local warthogs often provide the entertainment around camp!

Today you set off on your trail on horseback. You'll ride for c. 4 hours until reaching Mlilwane North Klipspringer camp. The afternoon is free to relax in camp and enjoy the bush. Dinner and overnight camping.

Breakfast in camp and then set off on a full days ride through commercial pine plantations, stopping for a saddlebag lunch along the way. Eventually you'll reach the Forester's Arms hotel where you'll have dinner and overnight.

Another full day of riding through commercial pine plantations. Today you'll have to dismount for a short scramble before remounting to ride through a rural Swazi community and back onto Mlilwane North. Another saddle bag lunch before reaching your new camp at EmaSomini for dinner.

Today is split into morning and afternoon rides as you explore the mountains, returning to camp for lunch and dinner. Second night at EmaSomini camp.

Another long ride back to Mlilwane Rest Camp, aiming to arrive in time for lunch. In the afternoon you are transferred to Hlane, arriving at c. 4.30pm. Dinner and accommodation in Ndlovu camp.

An early breakfast before heading out on a game drive in search of elephant, white rhino, lion and giraffe. There are also a high number of tree-nesting vultures recorded in this area. Return to camp for lunch. In the afternoon you take another game drive whilst transferring to Mkhaya and Stone Camp for dinner. Mkhaya is Eswatini's Refuge for Endangered Species and here you may spot white and black rhino, giraffe, tsessebe, sable antelope and buffalo. You may also be lucky enough to spot the bushbabies around camp.

A sunrise game drive at c. 6am before breakfast and then a game walk through the park before lunch. The game walk is part of the Mkhaya experience, where you can learn more about the signs of the wild. Another game drive is scheduled for the afternoon. Second night at Stone Camp.

An early breakfast and transfer to meet the shuttle back to Johannesburg airport.