One of the pillars of Menorca's culture is the history and character of the Menorcan horse.The Menorquin breed was only recently recognised in 1987 although it has existed for many centuries. In the XIV century the horse was the main player in Menorca's defence system, associated with the bridle pa… 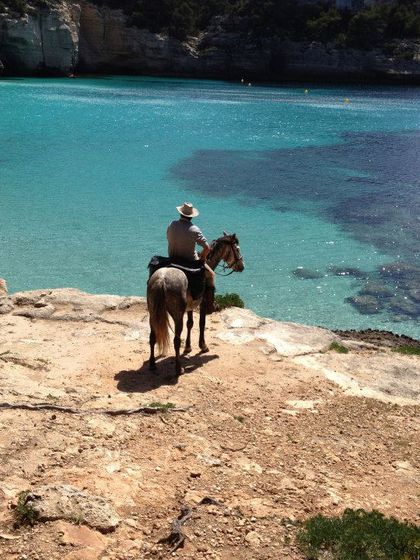 One of the pillars of Menorca's culture is the history and character of the Menorcan horse.The Menorquin breed was only recently recognised in 1987 although it has existed for many centuries. In the XIV century the horse was the main player in Menorca's defence system, associated with the bridle path known as the 'Camí de Cavalls', which runs around the edge of the island and is around 180 km. The route originally linked up the fortresses and watchtowers of the island and was regularly patrolled by soldiers on horseback. In recent times the path has been restored and is now the perfect way for riders to explore Menorca and the incredible scenery it has to offer. The horse remains the true star of local festivals - the local breed is famed for its shiny black coat and ability to walk on its hind legs in a move known as the 'bot'.

At the equestrian centre you will find a young team with extensive experience in the equestrian world. Toni, the owner, has worked with horses since childhood and successfully participated in various disciplines, horses are his passion. He breeds his own horses and knows Menorca, and its many paths well, from the back of a horse. His family comes from Menorca so he has a deep knowledge as well as love for the island. You will also be accompanied throughout by Maria-Elena who guides some of our other trails in the Gredos Mountains of Spain.

Anyone who loves nature will enjoy the excursions available here. The trail offers the possibility of getting to know the island from a new angle and the chance to discover the rich natural beauty and horse culture of the island.

PLEASE NOTE - all guests will need to pay a "tourist tax" of approx. 3€ (EUR) per day for their visit to Menorca. This tax is used to fund environmental and sustainable projects around the island and to counter the impact of tourism during the high summer season. 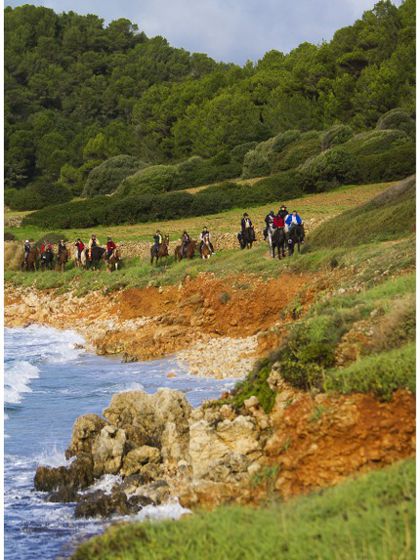 English and Australian stock saddles. Seat savers and saddle bags can be provided.

General good level of fitness and health is recommended. Many of the riding days are very challenging and will require riders to dismount and walk for long stretches, over some very challenging terrain. Some of the riding trails are also very steep, so you should have a good head for heights and be well balanced in the saddle too. 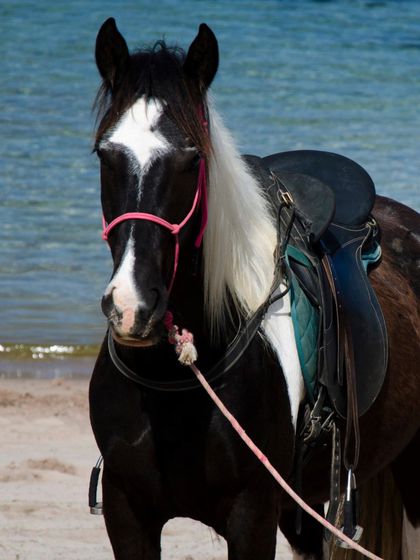 The cuisine offered on the trail is typical Menorcan fare and plenty of it too, with three courses at each meal.

The traditional cuisine of Menorca is a reflection of its history and island status. Superb dairy products reflect the British introduction of Friesian cattle to Menorca in the 18th century. Mahon Cheese is produced across the island to strict standards and is very popular throughout Spain, characterised by a square shape with an oily yellow rind and a variety of types, depending on their maturity.

Meat dishes are also worthy because of their meticulous and traditional preparation. Pork is put to good use in dishes such as baked rice and Spanish omelette with delicious pork sausage and Menorcan style meat balls. Seafood is an unsurprising favourite with an abundance of prawns, mussels, squid, mullet, sole and sea-bass, however the island is famed for caldereta de llagosta, a lobster stew once prepared simply by local fishermen.

They also produce an array of pastry desserts including almond macaroons (carquinyols) and ensaimada (a fluffy spiral pastry made with lard and sugar). Menorcans also have their own ice cream from Alaior - La Menorquina. Its smooth, creamy taste is highly popular and is now sold throughout Spain.

Drinks with meals are included, so it's a great chance to sample some of the wonderful beverages produced on this island. As with much of the Spanish wine produced on the mainland, the wines of Menorca are very good quality. Commercial production of gin in Menorca began in the 18th century, stimulated by demand from British sailors. Xoriguer is the last remaining distillery on the island, whose gin is still sold in traditional earthenware bottles. Unlike British gin (NOT recommended with tonic) and more akin to the Dutch version, it is traditionally drunk neat, with herbes (a locally made liquer) or with lemonade to make a pomada.
NB. Drinks in hotel bars outside of meals are not included and you will pay for them locally.

Accommodation is in a variety of comfortable hotels along the route. These hotels may vary depending on seasonal availability, but the following is the usual. 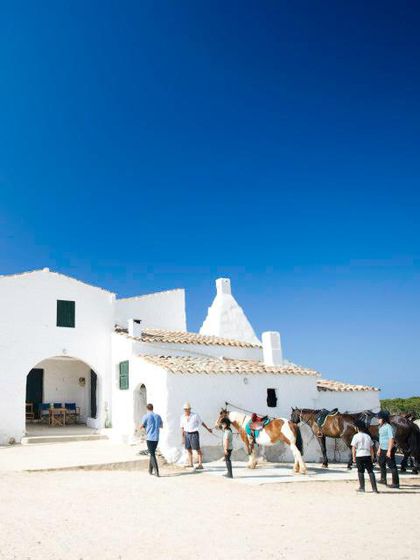 This is a point-to-point trail, so there are little opportunities for non-rider activities. However, alternative hiking tours and biking tours can be arranged for non-riders with prior notice. It may be possible for the non riders to meet the riders at the hotels in the evening. 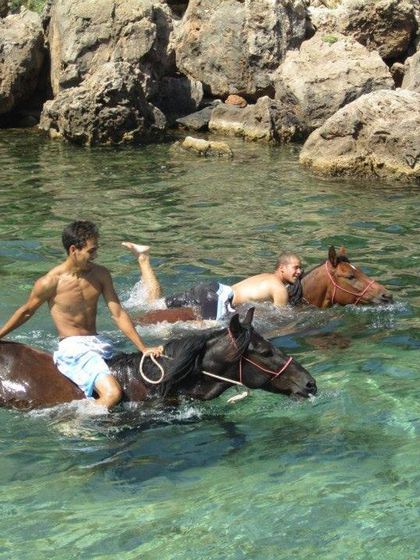 Guests should fly into Mahon airport (also known as Mao) from where they will be collected. Group set time collection transfers are included from the airport - usually at 16.00pm, but may vary depending on the group. 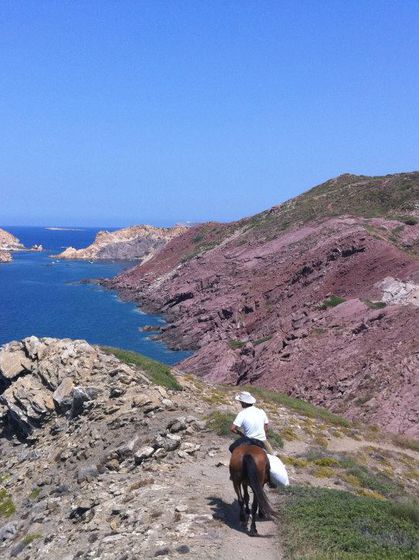 Extremely challenging for the "less experienced" rider. Even for a regular rider on the first two days. (Accommodation?) All excellent, two three course meals a day and "two breakfasts". All drinks provided!! (Horses and tack?) All Menorcan horses, very sure-footed but fit. Some more forward going than others. Catalina matched horses and riders perfectly. Tack good and safety stirrups used. (Favourite memory?) The scenery which is stunning and different every day. 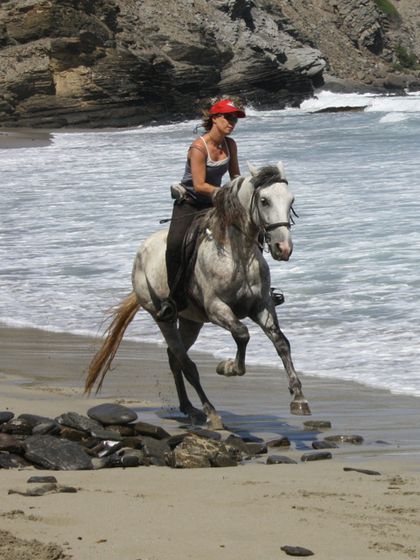 A six night programme which follows the Cami de Cavalls, an ancient bridle path used for the island's defence, around the whole island. By travelling on this route you can discover the lovely coast and the inland beauty spots. You will be accommodated in comfortable hotels along the way.

Please note that this trail is ridden mainly at a walk due to the terrain. There is a little trotting and cantering each day for short distances (except on Tuesdays). So please note this is not a fast trail. They ride along rocky trails which can be difficult for the horses so it is a trail for experienced riders happy to enjoy the contrasting scenery and wonderful flora and fauna of this lovely island.

You will be transferred from the airport to the hotel, in Ciutadella, where you will stay for the first night.

After breakfast you are transferred a short distance to "Eugues de Flo" near Torre del Ram. After preparing the horses you set off to discover one of the wildest parts of the island. Riding along this stretch of the trail you will be able to observe the traditional buildings and the endless dry walls, as well as the huts for the animals. At around midday you will reach Cala Morell, where you will stop for a picnic at the Caves of Cala Morell, on  the north coast of Menorca. This is the location of one of the most important archaeological sites of the island, the Necropolis of Cala Morell, containing a set of fourteen caves carved out of the cliff-edge artificially. This necropolis also has around twenty small oval-shaped cavities or niches, known as “capades de moro”, which may have been used as ossuaries, urns or for the burial of children.

After regaining some energy you will continue along the route to Son Àngel, home to your horses and guides. Leave the horses here and transfer back to your hotel in Ciutadella for dinner and to overnight.

(Please note that this section of the route includes some very steep tracks and challenging terrain).

Breakfast at your hotel before you are transferred to Son Àngel to get the horses ready for the next stretch of the route. Today you will pass by the Pla de Mar, to the virgin beach of Cala Pilar where you will find a source of fresh water. The clean intense blue water contrasts with the reddish rocks and the yellow sand, creating the landscape that best identifies the northern coast of Menorca. At Els Alocs and Son Ermità, where you will be offered a typical farmer’s lunch (or a picnic at Els Alocs as an alternative). You will continue after lunch towards the succession of beautiful beaches - Cala’n Calderer, Cala Barril, Pregonda and Binimela. Leave the horses and transfer to Es Mercadal where you have dinner in a traditional Menorquin restaurant before overnighting in a rural hotel.

(Please note that this section of the route includes some very steep tracks and challenging terrain).

Following breakfast, you will be transferred to Sant Vicent where you will get the horses ready and set off towards Binimel·là and Cap de Cavalleria. This stretch of coast is one one best preserved areas of the Menorca coastline. The path continues inland between croplands and stone walls until Cavalleria beach. At this site you will be able to witness impressive dune systems where there is much vegetation. You will have a picnic lunch in Cala Viola and visit the Cap de Cavalleria Ecomuseum. Then, you will then carry on to Cala Tirant and end the day at Hostal Port Fornells where the owners have horses which they participate in the island festival of "Jaleo"

After breakfast, you will be transferred to the park of Torre d'en Galmés, where you will visit the largest 'Tayayotico' site on the island - the Talayots were watch towers built by pre-Roman settlers. From here you will take the Camí de Cavalls at Llucalari. The route will continue towards the beach of Son Bou, the largest of the island and from there on to Talis and Sant Tomàs, where you will find an early Christian basilica and dunes of high ecological value. You will turn inland through the farmland fields of Son Bou meadow also know as Albufera de ses Canessies, the most important one after the natural park where you will stop for lunch at the restaurant Es Bruc. After lunch you head inland, stopping to visit the amazing cave Cova des Coloms, also known as the Cathedral because of its dimensions. Ride on to the stables of the country hotel Binigaus Vell where you have dinner and spend the night.

The trail today continues south onto the Cami de Cavalls before heading inland around and along deep gorges called Barrancos. After riding through Cala Mitjana and Cala Galdana you reach the unspoilt beach Cala Macaralleta. Here you head back inland to the private finca Torralbet where you taste a selection of Menorquin pork products (sobrassada, carn i xua, cuixot etc) and cheeses. This is where your ride ends and you are transferred back to Binigaus Vell for a farewell dinner and overnight.

You will be transferred to the airport after breakfast.