Day of the Dead

Day of the Dead

The 'Day of the Dead' (Dia de los Muertos) in Mexico is a celebration of the memory of family and loved ones who have passed. The ritual aims to celebrate the memory of those who have been rather than committing them to oblivion. The pre-Hispanic ancestral tradition has become popularised in modern… 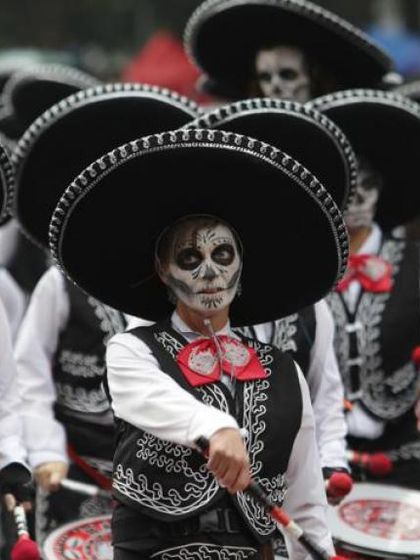 The 'Day of the Dead' (Dia de los Muertos) in Mexico is a celebration of the memory of family and loved ones who have passed. The ritual aims to celebrate the memory of those who have been rather than committing them to oblivion. The pre-Hispanic ancestral tradition has become popularised in modern culture worldwide by the Mexican illustrator Jose Guadalupe Posada.

In this celebration of the Day of the Dead, death does not represent an absence but a living presence; death is a symbol of life that materialises on the altar offered. Families will organise parties to celebrate their relatives and in order to guide them on their way to their new life in the underworld.

UNESCO has declared the feast of the Day of the Dead as a Cultural Heritage of Humanity, due to its importance and significance as a traditional expression and representation of the community. The traditional celebration is truly considered a treasure of Mexican culture, with elements both from the new Catholic and historic indigenous beliefs of the country. Every year families place offerings and altars decorated with flowers, ornaments (traditionally made of paper), sugar skulls and food that their relatives liked in life. The offerings have great significance to the families because they are believed to help guide the souls on a good path after their death.

During the riding programme, you will be immersed in one of the most spectacular and vibrant Mexican traditions of all time. You will discover it in a unique way, on horseback, participating in the daytime processions and nighttime celebrations. You will also discover the value of this ancestral tradition and the warm hospitality that distinguishes the Mexican people. You will taste a variety of dishes that are central to the gastronomy of Mexico; enjoy the best tequilas; listen to mariachi music; ride through sites of great historical value; heritage cities; magical towns and villas full of legends. Accommodations are promised to be exceptional and well matched to the characteristics of this magnificent travel plan.

This is undoubtedly a "unique" horseback ride, to the very heart of Mexican culture, which will allow you to experience some of the most important treasures of their culture and traditions.

The horses used for this ride are mostly Azteca, Quarter Horses and Mexican Creole, ranging in height between 15hh-16hh. They are responsive, forward going and well trained, as well as being fit and able to cover the long hours required on this route.

Riders aged 14 and over can be accepted for this ride. Minors aged 14-18 should be accompanied by an adult, or have written permission from a parent or guardian. 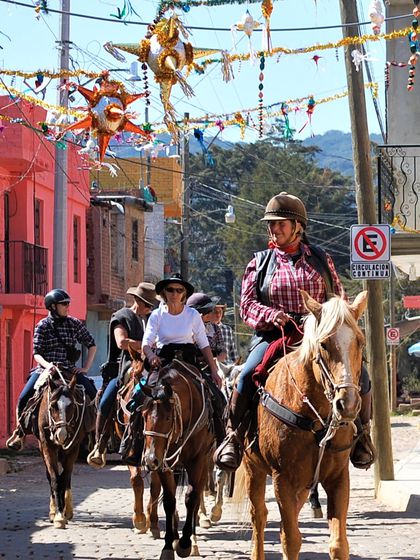 During the ride, all of your meals will be included from dinner on the day of arrival until breakfast on your day of departure. Only lunch on day two is not included.

You will enjoy a veritable feast of traditional Mexican dishes; often simple spreads, but packed with plenty of flavour and fresh ingredients. Vegetarian diets may be accommodated with advance notice.

Each night except 1 is spent in comfortable and authentic local haciendas and hotels along the trail route, in double/twin rooms. For one of the nights you will stay in a multi-shared room. Single rooms may be available on request and at an extra cost, but cannot be guaranteed. 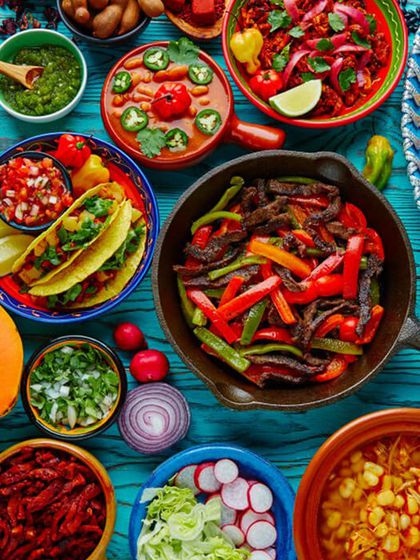 The first three days are dedicated to experiencing the tradition of the Day of the Dead in two of the most beautiful cities in Mexico. During these days you join in the festivities and there is no riding. You will visit museums , explore the towns, join the parades and attend outdoor theatres.

Once you start riding, this is predominantly a riding programme, although you do stop and visit the sites you pass.

Non-riders can be accommodated. 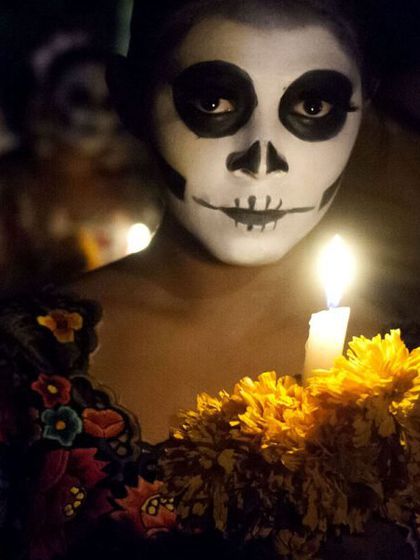 The nearest airport for this ride is Leon (BJX) in the state of Guanajuato. There are limited direct flights to Leon from Europe and so you may need to take a connecting flight via Mexico City.

The meeting point for the trail is in the city of San Miguel de Allende, strictly at 16:00 hours on day 1. 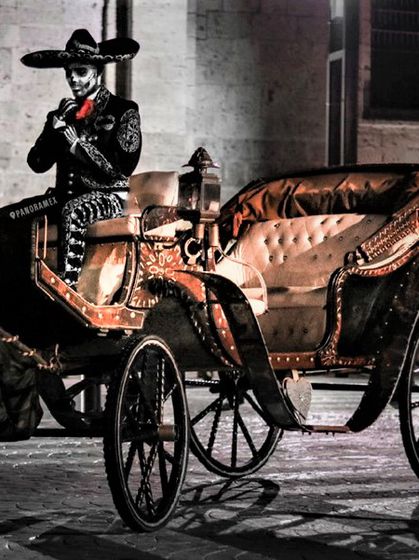 Day of the Dead Trail

Discover the wonder of the 'Day of the Dead' tradition in Mexico. The first three days are dedicated to discovering and experiencing this tradition in two of the most beautiful cities in Mexico, which are also recognised for preserving the oldest traditions and culture. Over the following days, you journey on horseback along the trail of this ancestral tradition and visit the mysterious villages of the area.

Day of the Dead Trail

You are met at 16:00 in a hotel in the city of San Miguel de Allende. This city is characterised by its rich traditions, in which popular events and festivals play an important role throughout the year. San Miguel is a town full of magic and preserved traditions occurring nowhere else in the world. It's a place of culture and art, recognised by UNESCO under the title of Fortified City of San Miguel and Sanctuary of Jesus Nazareno de Atotonilco for its contribution to the Mexican Baroque.

You will enjoy a welcome cocktail and opportunity to meet your guides, fellow guests and a presentation of the programme. After this, you will set off to visit the historical centre together before dinner.

Today you will experience the intensity of the Day of the Dead tradition. You will be taken on a guided walking tour through the route of 'offerings' to the Day of the Dead and will visit the historic pantheon of San Juan de Dios to view this tradition. Later you will join a mixology workshop that specialises in pre-Hispanic drinks. You will create and taste four cocktails that transcend the history of Mexico: Tepache, Pulque, Pox and Raicilla.

In the afternoon you will attend a theatrical performance as a prelude to the Day of the Dead. The performance is held in the main square and organised by the House of Culture and Arts.

Lunch is to your own account today so you can choose from the many delicacies on offer.

After breakfast today you will be transferred by car to the city of Guanajuato (approx. 1 hour away). This colonial city comprises beautiful buildings which contain elements of the two main cultures that created them - the indigenous and the Hispanic. The constructions retain their architectural and environmental characteristics and the city was declared the Historic City of Guanajuato and Adjacent Mines by UNESCO in December 1988. It is currently considered the most beautiful colonial city in Mexico.

You will visit the historic centre and walk through its narrow alleys, discovering the magic of the celebration of the Day of the Dead in local houses, squares and gardens. You'll also visit the "monumental offering" of Guanajuato and "El Tapete de la Muerte" (the death carpet) as well as "La Catrina Vive Festival" where you can enjoy live music with local mariachis.

After breakfast, you visit the Museum of the Mummies where you can learn about the ancient art of the mummification of Mexican ancestors, some of which date back to 1870. It is considered to be the current largest collection of natural mummies in the world (57 items are in the museum) and part of the cultural heritage of Guanajuato.

You then transfer to Rancho Colomitos where your horses are waiting for you. After being assigned your horse you'll be given the chance to get acquainted with them before you prepare for the "Catrinas". Catrinas are the symbol of death and the icon of the Day of the Dead in Mexico. You'll be able to dress yourself and your horse to later make a horseback tour of the ranch including a photo and video session of everyone dressed up. You end the day with a Catrinas themed dinner at the ranch.

Today your journey on horseback will begin. You will start by riding through a collection of settlements known as the Mystery Villages. Riding through the mystery villages you'll experience the magic and splendour of the various communities in which the Chichimeca culture, mining and Cristero region converge. What better time to tour the legends and traditions of the Mystery Villages than after the celebration of the Day of the Dead.

Continue your journey through the Mystery Villages, visiting the ancient communities nestled in the mountainous area which is recognised for its richness in minerals. You'll visit the ancient cemeteries of Peregrina and Monte San Nicolas which date back centuries and have some of the most romantic and mysterious legends which will be narrated to you by your guide.

Today your horseback journey takes you to discover the greatest biodiversity areas in the region. Ride through oak forests, pine trees and small communities full of history nestled amongst the high mountains and surrounded by majestic natural landscapes. Eventually, you will reach your destination which is one of the oldest communities in the region - Sangre de Cristo (Christ's blood).

* Tonight your accommodation is in dormitory-style shared rooms.

Today's ride takes you through some areas which include ancient and historically important communities such as the indigenous Chichimeca, sites of the old Cristero war and valued silver mining too. Beginning at Sangre de Cristo, you'll ride through the communities of Mineral de la Luz, San Ignacio, the old mine of San Juan, El Zocalo de la Luz and the old Sangre de Cristo cemetery. These are the oldest communities in the state of Guanajuato which contain a great historical and cultural value. During the 17th century, they were some of the most prosperous mining enclaves in the region. By the end of the 19th century, these three towns - Sangre de Cristo, Mineral de la Luz and San Ignacio - became ghost towns.

Enjoy your final breakfast at your hotel.