This is a superb opportunity for intermediate and experienced riders to explore the Northern and Southern valleys of the Gredos mountains. This is excellent terrain for riding, mostly open fields with magnificent views and paths that follow the course of rivers. The small villages along the trail d… 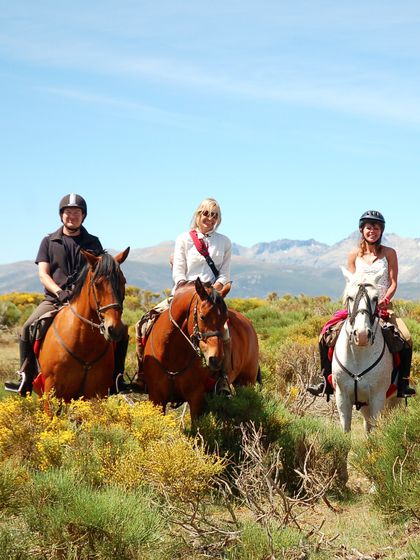 This is a superb opportunity for intermediate and experienced riders to explore the Northern and Southern valleys of the Gredos mountains. This is excellent terrain for riding, mostly open fields with magnificent views and paths that follow the course of rivers. The small villages along the trail display the architecture, traditions and way of life of the people who, isolated in this remote place, have had their characters shaped by their unique surroundings.

The Sierra de Gredos mountain range, situated south west of Madrid, features a large area with Regional Park Status. The surrounding region comprises of the provinces of Avila, Toledo and Cáceres, in the regions of Castilla-León, Castilla La Mancha and Extremadura. Trails in the Gredos Valley take you through a very characteristic part of Avila, truly rural Spain, and this medieval town is surrounded by walls constructed in the 11th and 12th centuries. It was and still is a very religious place, with a grand gothic cathedral, charming squares and beautiful, quiet streets which are very pleasant for walking around the historic town.

Originally, only shepherds moving their flocks had reached the remote alpine valleys of this mountain range. It wasn't until 1905 that the Sierra de Gredos became an area of interest when King Alphonso XIII created the Gredos hunting reserve in an attempt to protect the wild Spanish Ibex, of which only a few were left. Today the Gredos mountains have one of the largest remaining populations of this goat and it is thanks to Alphonso XII that there are now byways in place to reach the highest peaks of the Gredos, its glaciers and its lagoon (Laguna Grande). Roman roads can also be seen here as although they did not settle in the Gredos, they created mountain passes for the movement of troops.

As riders explore this fascinating part of Spain, they will be impressed by the diverse display of flora and fauna through the Tormes, Corneja, Alberche and Tietar river valleys. The landscapes here are full of light and colour, where wild nature shows its splendour. There are opportunities to ride up slopes of oak, pine and chestnut trees, cross rivers of pristine waters, discover wildlife from rocky overlooks and gallop across pastures and open fields. The climate here is influenced by the altitude at which you are riding and summers can be very warm and sunny, with autumns somewhat cooler. Spring rides are spectacular with millions of wild flowers and snow in the mountains from May until early June.

Maria, the host of this ride, has been arranging trails in Gredos Valley for a number of years. She is at home with the customs, natural history and culture of the region and this makes her a wonderful travel companion throughout the holiday. 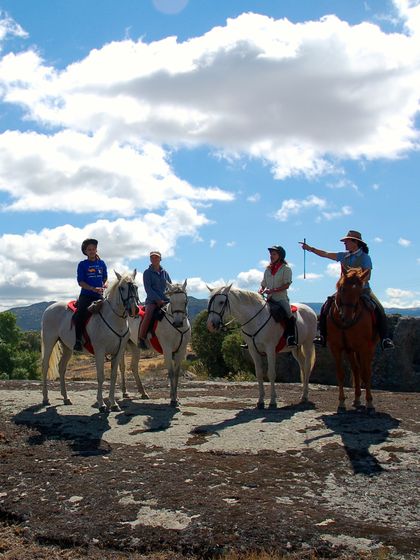 Riders should be aged 18+ for these trails.

Reasonable health & fitness required. Must be able to cope with long hours in the saddle. 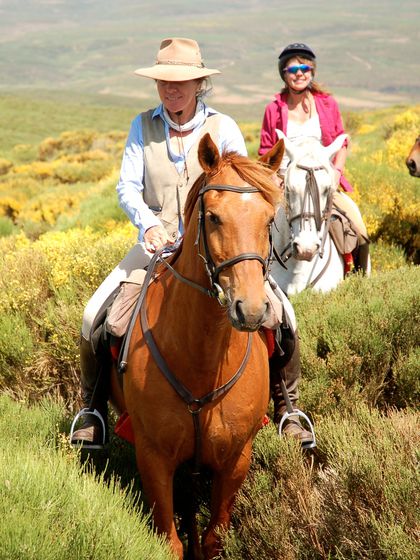 The local cuisine combines a number of excellent dishes from the region, allowing you to sample many delicious local specialities.

A support vehicle will follow the riders during the trip, meeting for aperitifs, meals and at night. Breakfasts, aperitifs, lunches and dinners are included whilst on the trek. Lunch is usually a picnic in the countryside with set tables, chairs and a small feast everyday! Some lunches will be cooked on the spot, others prepared in the village in bars and restaurants, always delicious. Dinner is at the hotels and will feature a varied selection of the typical cuisine.

Vegetarians can be catered for with prior notice.

Drinks outside of meals - at the hotel bars - are not included. Riders will need to pay for these drinks as they consume them.

Accommodation during the trails will vary from rustic to luxurious, sharing with you some of the most representative and charming hotels and paradors of the region. However, no matter where your trail leads you, you can be assured of comfort and en suite facilities.

Lodgings have been chosen to take into account the availability and suitability of the natural environment through which you will travel. This includes a cosy rural hotel, a simple but comfortably furnished room in a monastery and a luxurious medieval castle now converted into a National Parador. At the end of a long day in the saddle you will look forward to reaching your accommodation.

Despite differences in the types of accommodation provided you will always be sure to find a warm welcome and drinks waiting for you, shortly followed by a hot bath or shower and an excellent dinner.

The Valleys of Gredos Standard accommodation. 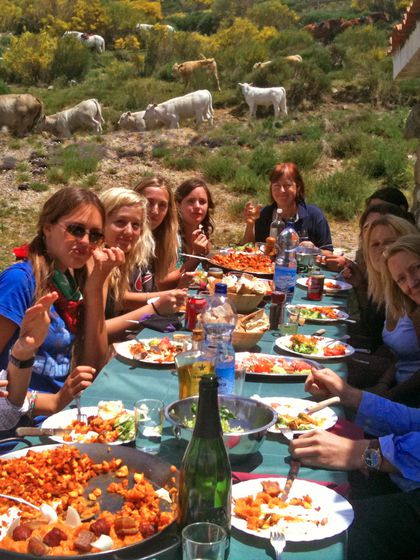 If you wish to spend some time in Madrid, Avila, Segovia or Salamanca before or after your ride, please contact us for recommendations.

Avila is a medieval walled town and one of the world heritage cities of Spain. It is one of 660 cultural sites in the world that the world heritage committee considers as having outstanding universal value. Avila is the city of saints and stones. The birthplace of St Theresa and the burial place of the Grand Inquisitor Torquemada Avila has kept its medieval austerity. This purity of form can still be seen in the gothic cathedral and the fortifications which are the most complete in Spain. Charming squares and beautiful pedestrian streets make for a very pleasant walk around this old historic town. 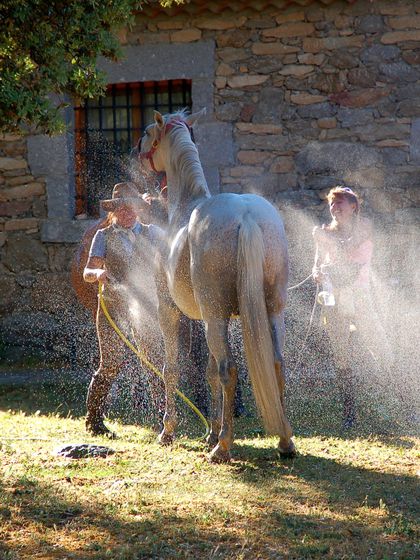 Flights to Madrid are offered by a number of low cost airlines. Transfers are included in the price from Madrid-Barajas International Airport Terminal 4. You will be collected from there at 3pm on the Sunday of your arrival.

Flight departure on the Sunday after your ride should be booked for any time after 13.00. 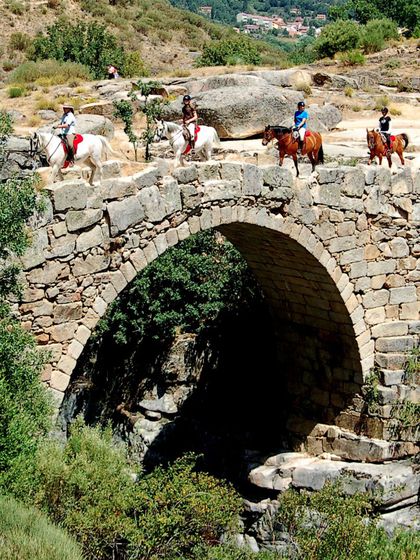 1st Class - excellent horses quality well-maintained tack. interesting routes - plenty of canters! very happy with the horse I was allocated - named Texas. Maria Elena is an excellent guide and companion. She speaks excellent English. Her staff are very good too! 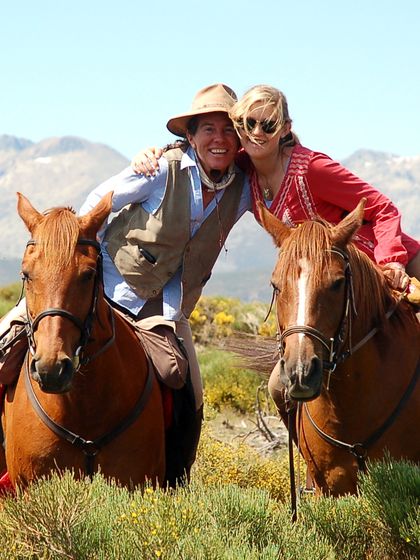 The Valleys of Gredos

Immense landscapes, unspoilt nature, remote Castilian villages, great diversity, delicious aperitifs and picnic lunches, charming hotels... a lot of reasons make this one of the destination's most successful rides. One never gets tired of the views, the scents of the wild flowers, and the smiles of the people in the villages. The most spectacular spring ride in the months of May and June with thousands of wild flowers and the snow in the mountains.

The Sierra of Gredos is one of the most characteristic regions of the Iberian Peninsula situated between the provinces of Avila, Cáceres and Salamanca, and crossed by the Duero and Tajo rivers. The landscapes are full of light, colour and nature. The Valleys of Gredos trail travels through a very representative part of this region in the province of Avila, truly rural Spain. It is excellent terrain for riding, mostly open fields with magnificent views and paths that follow the course of rivers. Riders will be inspired by this National Park's diverse display of flora and fauna through the Tormes, Corneja, Alberche and Tietar river valleys. Ride up slopes of oak, pine and chestnut trees; cross rivers of pristine waters; discover wildlife from rocky overlooks, and gallop across pastures and open fields. The small villages along the trail display their architecture, their traditions, and the way of life of their people, isolated in this inaccessible nature that shapes their unique character.

The Valleys of Gredos

You will be transferred from Madrid (Pick up at 3pm) to Navarredonda de Gredos, a small village in the heart of Castile with a splendid view of the Sierra de Gredos. This is a region steeped in history, where the Moors and Christians fought, where Romans built roads that have lasted for centuries. Time allowing you will also stop enroute at Avila to visit this medieval historical town which is UNESCO World Heritage recognised. Welcome dinner and overnight at the Gredos National Parador.

Circle ride from Navarredonda, an easy introductory day, with a picnic lunch in the countryside. You will ride through pine woods, open fields and trails, towards the mountains with great views of the Sierra de Gredos. A picnic lunch in the countryside will be enjoyed by the group. In the afternoon you will ride back to the stables in Navarredonda, returning for dinner and overnight as the previous night. Todays ride is short so riders and horses get used to each other. If any change of horse is necessary it can be done, before leaving the next day and for the rest of the ride. A nice small Spa has been opened in the next village (5 min away). It is possible to arrange a session - a special rider’s massage - in the evening before dinner.

Today will be a long half day ride, a progressive ride to get to El Barco. You will ride along the Tormes River valley, along cattle paths, passing the village of Aliseda de Tormes. You will appreciate the change in the vegetation as you approach the small town of El Barco de Avila. The hotel in Barco de Avila is a country hotel, a luxurious hotel built as a restoration of an ancient country estate. The hotel has a spa and an indoor heated pool, a good chance for a rest to be fresh for the rest of the ride. You will have a free afternoon to visit El Barco de Avila or just relax in the hotel. El Barco de Avila is a 15th century walled village with a medieval bridge stretching over the Tormes.

Today’s ride will proceed through holm oak woods and pastures, following the cattle track between Barco and Hoyorredondo, arriving in Puente del Congosto, with a XVth century bridge and castle. Picnic near the river - a beautiful spot for a swim in the summer. In the afternoon there will be a fun short ride to Hoyorredondo. Overnight will be at a beautiful and comfortable rural hotel.

A day with great contrasts in the landscape. The ride will start in the valley of the Corneja River, open flat valleys until you reach the aperitif stop. You will follow the river Corneja to its source, and stop for lunch near one of the water mills along the river. In the afternoon you will follow a Roman road up to the Puerto de Chia (5,686 feet) for a panoramic view of the Corneja Valley on one side, and the Alberche River on the other. You will descend to San Martin de la Vega where the horses will spend the night. There will be a short transfer to a charming rural hotel in Barajas de Gredos.

Itinerary may be altered due to unforeseen circumstances. All departures are guaranteed but the programme may be varied slightly in the event of less than 6 riders, but will be kept to the same high standards.