"Uruguay" means "River of the Painted Birds" in the local Guarani language and this riding trail takes you through traditional estancias, a biosphere wetlands reserve and along the beaches of the Atlantic ocean. Discover the land of the gaucho and his versatile working horse - the Criollo - whilst … 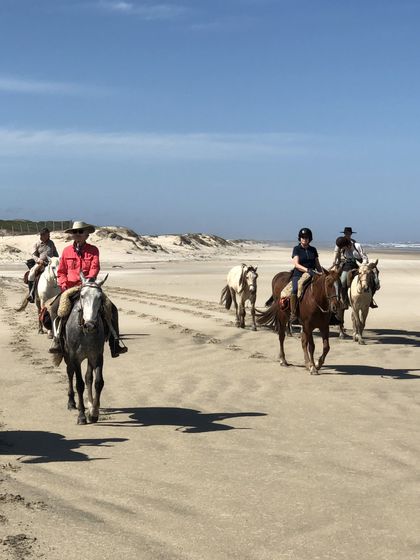 "Uruguay" means "River of the Painted Birds" in the local Guarani language and this riding trail takes you through traditional estancias, a biosphere wetlands reserve and along the beaches of the Atlantic ocean. Discover the land of the gaucho and his versatile working horse - the Criollo - whilst experiencing the thrill of driving cattle. Marvel at the variety of landscapes that you pass through and try to spot dolphins and sea lions along the coastline.

Moving on almost every night you experience the beauty of this region of Uruguay - riding along deserted beaches, over shifting sand dunes, through palm groves and shady woodland and along the shores of wetlands. There are lots of opportunities for canters on the grassy pastures or firm beaches. Each night ends at a charming hotel or local estancia where you can sample delicious local produce and wines.

As well as this full 7 night itinerary, we also have a shorter itinerary which is a perfect add-on to any of our rides in South America - see our Coastal Beaches and Vineyards ride for more details. 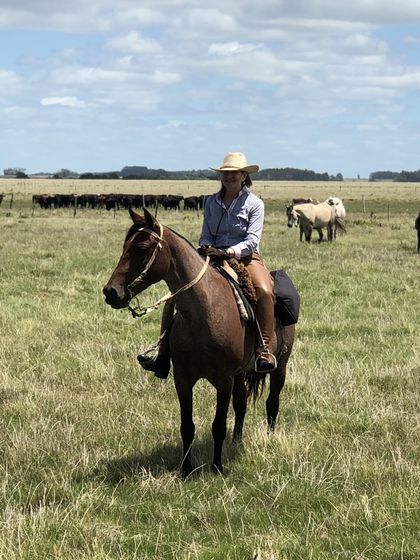 Local saddles are simple wooden structures with sheepskins thrown over for comfort. They are perfect for long hours in the saddle. Bridles are simple and often made with rawhide. The horses are used to being neck-reined so you maintain a very light contact on their mouth.

Children are only accepted as part of a private group and would have to be confident riding a horse of c. 14hh.

There are no specific health requirements but you should be fit and generally healthy. 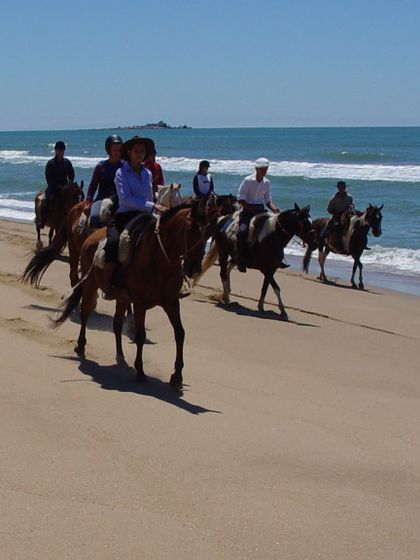 Meals reflect the local cuisine and include lots of fresh, local produce. As you are riding across estancias famed for their beef production, red meat does feature highly in the diet, but fish is also popular. Vegetarians can be catered for with advance notice.

You stay in a combination of charming seaside hotels and estancias. All are clean and comfortable with private bathrooms. As this is a trail ride passing through some rural areas there is not always a huge choice of accommodation but it has been chosen with care.

Please note that hotels may vary depending on the availability at time of booking, but these are the usual hotels:

In Montevideo you stay at the Don Boutique hotel which has a pool and rooftop terrace overlooking the water.
On your second night you stay at Fortin de San Miguel, a traditional building with spectacular views.
In La Coronilla you stay in one of the many hotels.
Your fourth night is at Posada Terrazas de la Viuda - a modern hotel close to the beach.
Your fifth night is at the Posada La Perla.
Your final two nights are at Estancia Guardia del Monte - a traditional, working estancia. 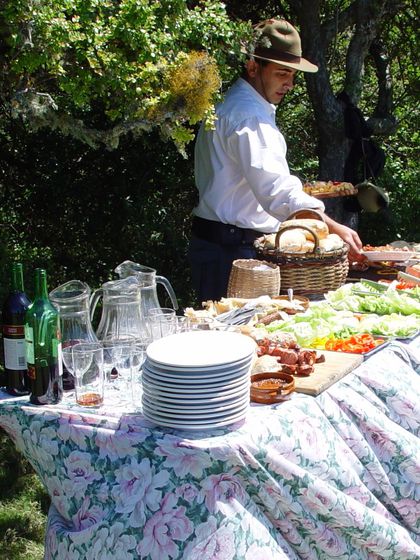 Sight-seeing, hiking, fishing, surfing, cycling, canoeing, bird watching.
Non-riders will be transferred between accommodations in the back-up vehicle but will not have specific activities laid on unless pre-arranged and booked. 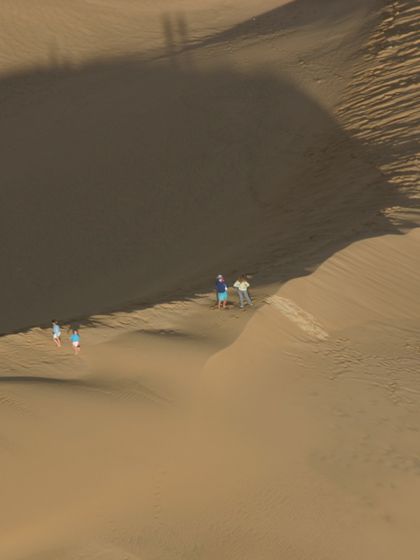 There are currently no direct flights to Montevideo from the UK, but there are both One-stop and two-stop flights which route through other countries. Popular routes are through major European hub cities such as Madrid, Amsterdam or Paris, or through Brazil and Argentina.

If you want to visit Argentina as well as Uruguay then you can also take a ferry across the estuary from Buenos Aires to Montevideo if you prefer not to take the short one-hour flight.

Transfers from Montevideo are included provided you arrive according to the times stated in the itineraries. 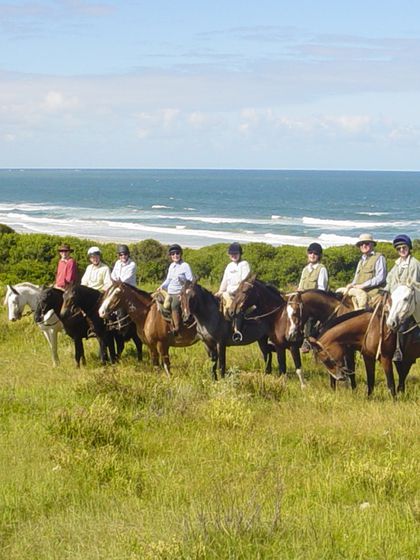 Discover the beauty of Uruguay on this horseback trail which journeys along secluded beaches, through wetlands and palm groves and onto working estancias. Experience the versatility of the Criollo horse as you canter down deserted beaches or work cattle with gauchos.

On arrival at Montevideo airport you will be met and transferred along the coastline to Montevideo and your downtown hotel. You will have lunch in the lively port market before going on a short walking tour of the Old City. Dinner is to your own account tonight so you can choose from one of the many restaurants on offer.

After breakfast you are transferred by road to the most beautiful province of Uruguay - Rocha - famed for it's pristine beaches, emerald shores and network of lagoons. Close to the small town of La Coronilla, you have lunch at Estancia La Rosada before embarking on your first ride. This ride around the estancia allows you to get used to the horses, style of riding and tack.

After a typical "merienda" (light meal) you continue onto Fortin de San Miguel, where you spend the night. This hotel is built of the same stone as a nearby Portugese fortress and offers spectacular views across one of the largest fresh water reserves in South America - Merin Lagoon - which is home to a large number of birds and native flora.

After breakfast you are driven to the town of Chuy which straddles the Brazilian border - inhabitants here speak a strange mixture of Portugese and Spanish! Mount your horses and set off riding towards the coast. After lunch and a siesta, using your horses saddle as a pillow, the afternoon offers a fast paced ride along the deserted beach of Barra de Chuy. There are seldom visitors to this beach and the pure white sands invite long, exhilarating canters. After 12 miles / 22 km you reach the town of La Coronilla and spend the night in a small beachside hotel.

Today's ride heads south, alternating beaches, sand dune, pine forests and coastal hills until reaching the immense Santa Teresa national park. If you are lucky you may spot dolphins playing in the surf along the route.

The centre piece of the park is a fort which was built by the Portugese in 1762 to defend their territories. The fort was captured by the Spanish a year later who completed the building. Over the next years the fort was captured, lost and re-captured many times until it was finally won by the newly formed Uruguay in 1825. The fort is surrounded by 3000 hectares of forest containing a mixture of native and imported trees.

After a picnic lunch you ride along the forest trails and down onto the beach where you will pass one of many shipwrecks that are buried along this stretch of coastline. In fact, Cabo Polonia which you visit tomorrow, is named after a Spanish galleon which sank off the point. Fortunately Darwin's Beagle did not succumb to the seas and he was able to spend many years collecting species in Uruguay and formulating his theories of evolution. Continue riding along the beach until reaching the charming town of Punta del Diablo where you spend the night.

You start the day with a short drive down the coast to meet your horses. You ride into a UNESCO Biosphere Natural Reserve and through a huge area of shifting sand dunes, which will make you feel as though you are riding through the Sahara desert. Hidden amongst the dunes is the Brioso Lagoon. Upon reaching the charming fishing village of Cabo Polonio, which can only be reached by horse or 4WD, you stop for lunch at a typical restaurant on the beach. Here you will be able to watch seals and sea lions that inhabit the small islands in the bay, and you may be lucky enough to see a migrating whale as it passes by. Those who wish to can take a swim from this beautiful beach.

In the afternoon, continue riding to the town of Valizas where you will have dinner and spend the night in a posada.

After breakfast, you ride along the beach of Valizas to the hidden Brioso Lagoon and the onto the wetlands of the Rocha. You will ride across an amazing untouched landscape of Palm groves. After a picnic lunch you continue riding to Castillos lagoon and then into the Ombu forest before reaching the traditional working estancia Guardia del Monte in the late afternoon. You will spend two nights here.

After breakfast you ride towards a neighbouring estancia - Barra Grande. You cross wetlands and a magical forest of Ceibos, Coronillas and native trees. After a typical Uruguayan asado lunch, you ride back to Guardia del Monte for a final dinner.

This morning is your chance to experience what it is like to be a gaucho on a traditional working estancia. The work varies depending on the time of year and you will work alongside the gauchos as they tend their sheep and cattle. You may be moving cattle or gathering them into corrals, perhaps catching a lame one for treatment. The friendly gauchos, with their berets and bombachas (riding trousers) and knives tucked into their colourful belts are a joy to watch as they work as a team with their dogs.

After lunch you ride towards the small town of Castillos. Here you can visit a local gaucho store where traditional bridles, bombachas (riding trousers), hats and ponchos will be available to admire and buy. Say goodbye to the horses and you are then transferred to the airport for your onward flight or to continue your holiday in Uruguay. Your flight should not depart earlier than 19:00.